We attended AdventureX festival in London last weekend and demoed our current game in development, SORS. The thought of real people (who weren’t friends or family) playing the game did make me nervous, but happily everyone seemed to enjoy it and we got some great feedback.

I thought I’d write a brief retrospective of what went well and what didn’t, so that anyone else in a similar situation can draw on my experience. I hope it helps – especially for those people who haven’t been to a festival yet to demo their game and are new to it all!

Needless to say, having an up to date demo means people aren’t pointing out bugs you already know about. Instead they're testing the game as it currently stands, which makes all feedback you get useful. 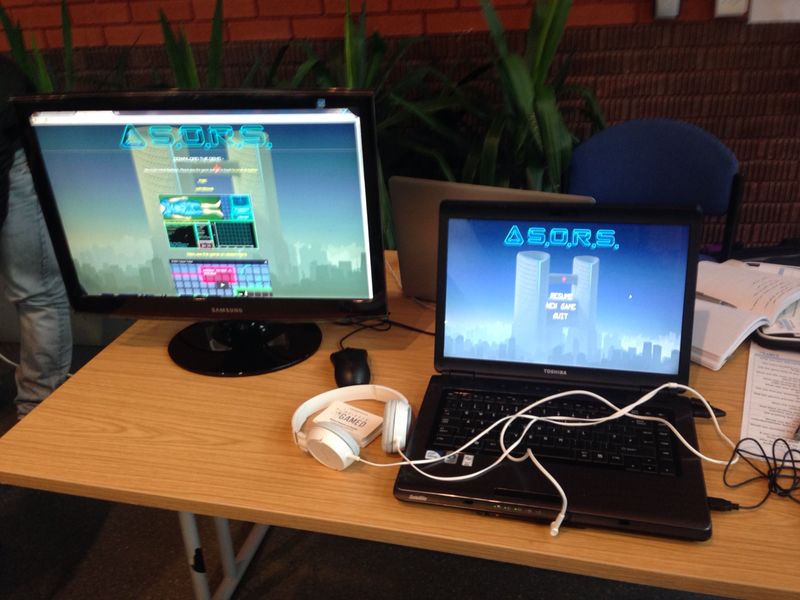 The updated demo ready for play testers, alongside a monitor showing the game website.

2. We had an eye-catching stand

Invest in a banner (you can buy them online). They’re cheap but really help you stand out. We also had a second laptop connected to a screen, showing the game’s website. It all helped catch people's eye and show what our game was about.

3. We had business cards

They’re a really useful thing to give away to help people remember you.

We had some chocolates and brioches on our table, and they were a great ‘bribe’ to get people to play test, or even just to break the ice. (“Hey, would you like to try our game? You can have some sweets!”). The brioches were also a hit with the surrounding tables when we offered them around!

5. We knew what feedback we wanted

We had an official ‘feedback’ form that some people filled in, with some questions on it taken from Game Design Workshop (Fullerton, Swain and Hoffman, 2004). What was equally valuable though was talking to people after they’d played the demo, and observing them whilst they played it. You can quickly see what the main annoyances are for players and by speaking to them you get a sense of what the main thing on their mind is. Forms may be more detailed but sometimes you lose the emotional richness gained from speaking to someone straight after playing. 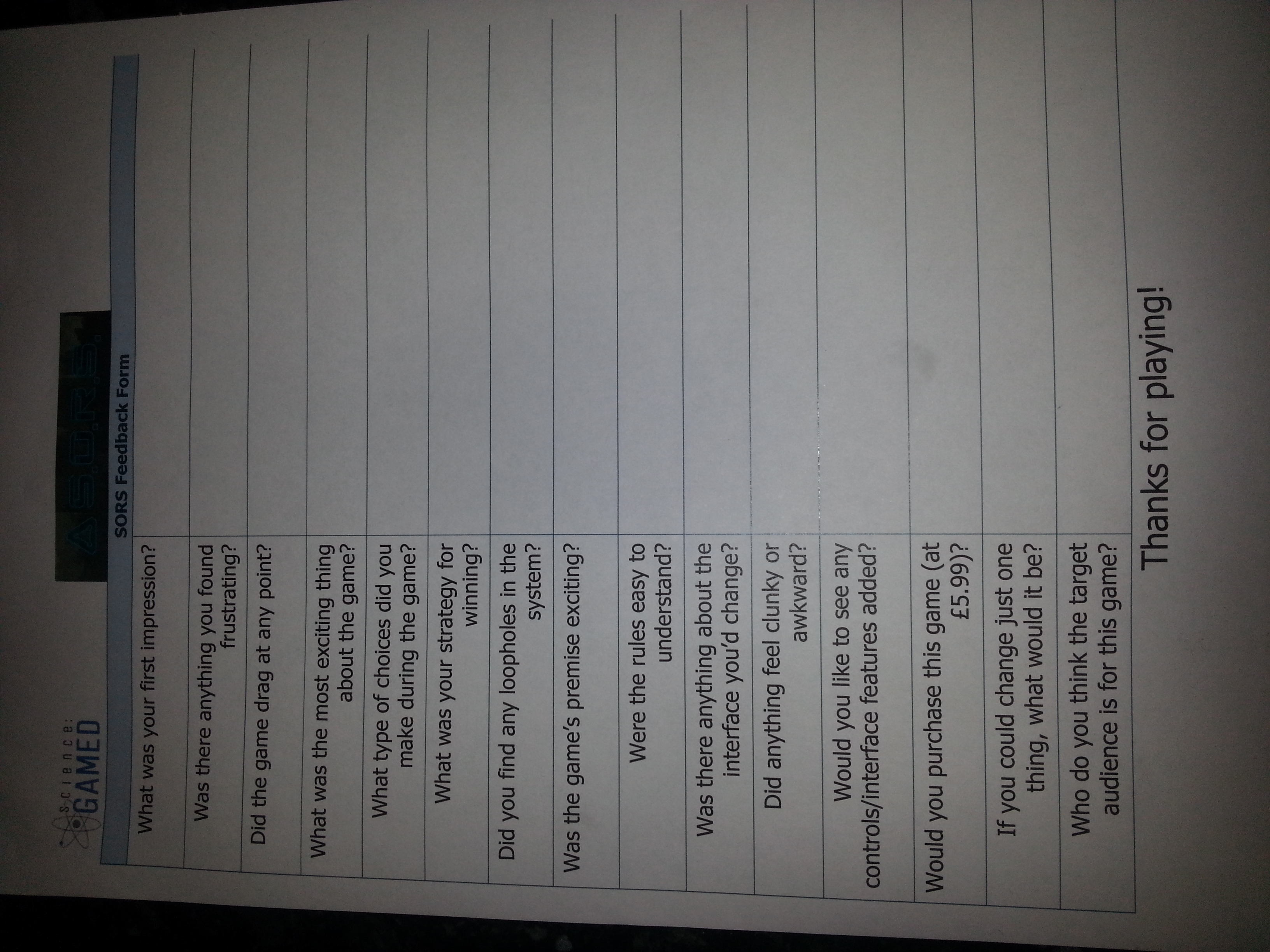 Our feedback form. Not too long, not too short.

After a couple of hours, I got past initial nerves and started chatting to other companies/developers around me. It was great to talk to them all, play their games and take on the role of a player. It was a nice break and it reminded me what it’s like to be a player!

Manning a stall by yourself for 8 hours straight is hard work. There were two of us, which gave us a little flexibility whilst always ensuring someone was manning the stall. You don’t want to leave your equipment unmanned, especially because you may miss potential players (or at least miss interviewing them after playing your game). Even if it’s just a friend, having an extra body around to help can be invaluable. 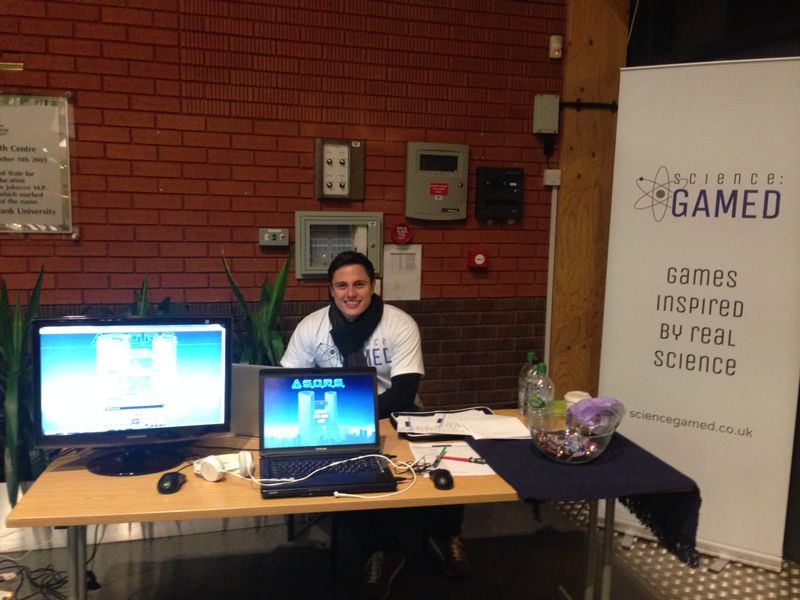 What we would do differently

We only had 1 PC with a playable demo on, but often there were people watching someone else play. If we were going again, we’d make sure to have 2 demo PCs (or more if possible).

We ended up on a corner table, ie: the furthest away from the door. In the end (because there weren’t too many other exhibitors around us), I don’t think it hurt us too much, but it’s definitely worth considering and even influencing which table you can have if you get the chance. Location, location, location!

We had nothing to tempt people back to our website once they’d left the festival. We didn’t even collect email addresses. Next time, we’ll almost certainly create some sort of competition and hand out leaflets that remind people to go to our site when they’re home (and register for the competition or something similar). It may be harder to do if your game isn’t released yet, but still possible. The fact is we missed an opportunity to build some excitement around the release of the game by gathering emails or something similar.

Overall, we had a blast

We had a great time at the AdventureX. It was fun to meet so many friendly people, and it gave us such valuable experience by letting strangers test SORS.

I won’t lie, I was scared at first. I was scared that people would laugh at my game or worse. I was afraid they’d get bored and say it was rubbish. Of course, this never happened. If there’s just one bit of advice you remember, please make it this: take the leap, and take your game to a festival! It’s invaluable experience, you’ll meet some great people and may even pick up some new fans along the way.